AccessBack.com began to receive strange xls-files – the user enters the correct password but Microsoft Excel does not accept it, and our service can’t find the encryption key for such files.

What is the reason? It turned out that LibreOffice can corrupt password-protected Microsoft Excel files. 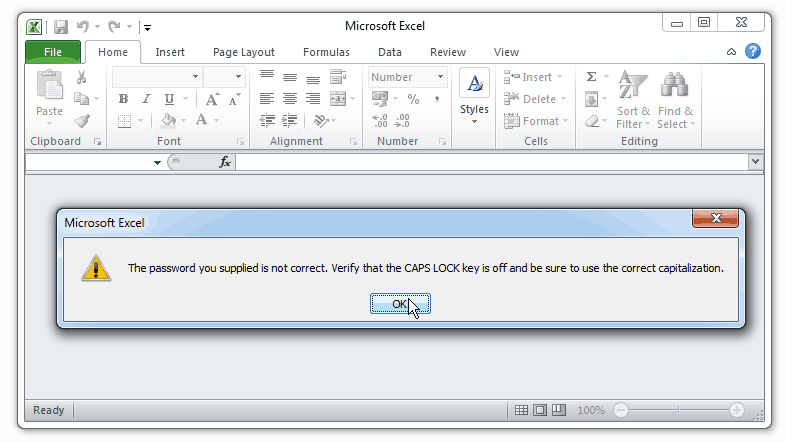 This article will give you answers and solutions.

Online service AccessBack.com uses the Passcovery original rainbow tables to find an encryption key (only 40-bit keys!), then it decrypts a password-protected Microsoft Excel / Word 97-2003 document and removes the Password to Open

The success rate is so close to absolute that we consider it 100%.

To deal with other individual cases our programs offer the encryption key search option. Though it takes more time it ensures that the key gets found with a 100% guarantee.

As soon as neither rainbow tables nor brute force search worked out and failed to find the encryption key we decided to overhaul the first strange file we got hold of.

It turned out that the storage of encryption key data was empty and the data per se were not encrypted, however password protection indicator was toggled on. Also right there in the Microsoft Excel file there was a record pointing to the likely culprit: Calc…

Later on the owner of one of these strange files clarified the situation:

“ The file was created in Office 2003 and password protection was enabled. Then it was edited and updated many times in Office 2013.

The data were edited many times using Office 2013. And every time the file password was accepted and everything was fine.

Yesterday I opened the file in LibreOffice Version 5.4.3.2 (x64) using a new computer, then modified the document and saved it. When offered to save in the old format 97-2003 or create a new file I chose to save it in Office 97-2003. After that neither LibreOffice nor 2003 nor 2007 could open these files. So I have the password but it is not accepted.”

Some of those who uploaded their files for decryption at AccessBack.com share the same story – they created and protected their files in Microsoft Excel but as soon as they edit them in LibreOffice something goes wrong and the passwords stop working.

Removal of «password protection» from Excel files corrupted in LibreOffice

You will need a HEX editor. We used Notepad++ and a special plugin but we also recommend HxD editor.

WARNING: Before you edit a file create a backup copy. If something goes wrong you’ll be on the safe side.

WARNING: This method does not remove the password from an encrypted Excel file! The method corrects the error that appears while saving an Excel file in LibreOffice – that is a document becomes not encrypted and a record appears indicating that password protection is being enabled. To find and delete passwords for Microsoft Excel / Word files use Accent OFFICE Password Recovery with acceleration on GPU.

Was this article helpful? Yes | No